Social ‘networks’, computer ‘networks’, ‘networking’ events, agency ‘networks’ – even the ‘Internet’. ‘Networks’ of one form or another are everywhere, but what do all these things have in common? And how can an understanding of networks help us become better digital marketers?
I want to go beyond our often unthinking use of the word network, and explore how a deeper understanding of networkscan help us identify influencers and communities online, creating content that really resonates and is more likely to be shared.
I’ll use an example of a network generated from Twitter, showing the follow relationships between people talking about Econsultancy, and sharing links from the site, over an eight day period in October 2013. 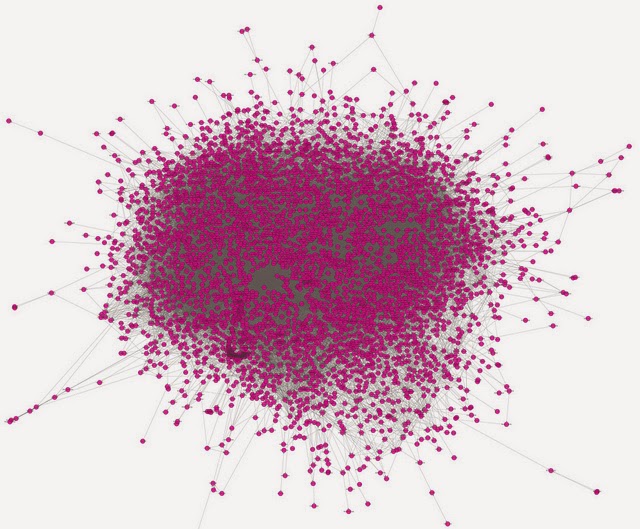 A network map of 3,930 Twitter users talking about and sharing Econsultancy links over an eight day period in October 2013

What is a 'network'?

At its most basic, a network can be defined as a collection of ‘nodes’ (things like people, products, or web pages) connected by relationships or associations of some kind (known as ‘edges’).
Mathematicians have been wrestling with networks for hundreds of years (through 'graph theory'), and more recently economists, sociologists and computer scientists have applied the mathematicians' insights to solve real-world problems.
There are many ways that understanding networks can help us become better digital marketers. A network algorithm, PageRank, underlies Google’s ordering of search results and allowed the company to power ahead of less network-savvy search engines such as Lycos, AltaVista and Yahoo! in the late 90s.
Networks are also central to the way that Facebook allows users to see and now find content, for example through Graph Search.
Network analysis also helps us understand patterns of social interaction between users on blogs, forums, and social media sites.

In our example Econsultancy Twitter network we queried the Twitter API to find the users who mentioned, or shared a link from, Econsultancy over an 8-day period, and then worked out the relationships between them. 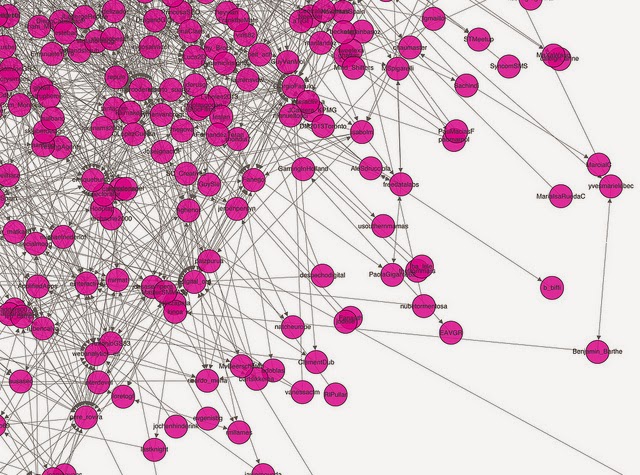 A detail of the network map of 3,930 users sharing Econsultancy.com content on Twitter
An increasing range of tools – including BlueNod, BottleNose, and various social media listening tools – allow us to gather Twitter network data. There’s also a range of free and paid software (NodeXL, yEd, Gephi, Mathematica) that allows us to analyse and visualise this data once we have it.
The ‘edges’ in our Econsultancy network are follower relationships between the users. Twitter networks made of other kinds of edges are possible. For example, we could decide to create an edge when one user mentions another, or retweets something they have tweeted.
But a network of follow relationships contains the richest and most complete data – because users follow so many more users than they interact directly with, and a ‘follow’ is a vote of confidence – or at least an expression of interest – in the user who is followed.
It shows that someone cares about their opinion and wants to hear it. It also gives us a clue about the direction in which information flows through this group of people, from the followed to the follower.

The Econsultancy 'community of interest'

Just by looking at the Econsultancy network we can see something fairly remarkable.
The vast majority of users (99.26% to be exact, or 3,901 of 3,930) are bound together in a single group – or network ‘component’, to use the technical term.
Every user in this group is connected, either directly or indirectly through others, to every other user. Why should this large group of people who seemingly share nothing apart from having mentioned Econsultancy on Twitter be bound together like this?
There are a few arcane mathematical reasons that make it more likely, but the fundamental reason is that the people in the network are a ‘community of interest’, defined by a shared enthusiasm for digital marketing in general, and Econsultancy.com in particular.
Real-life communities tend to be bound together by geography (a school, a workplace, a city), but online communities of interest are much more frictionless.
The connectedness of all these people talking about Econsultancy is pretty remarkable, when you think about it, and should give us a clue that something important is going on just below the surface.
In future posts I’ll be showing how we can look at the Econsultancy network to work out who is most influential, and to identify communities and cliques. I’ll also show how a Twitter network model can help us tailor content so that it really resonates, and is disseminated as deep into the network as possible.