Why In-Person Socializing Is A Mandatory To-Do Item

BY KEVIN PURDYSun Dec 11, 2011
We are genetically oriented toward learning from others, an easy thing to forget these days. Here's why in-person socializing is so important, and efficient.

I’m a 30-year-old writer who works from home and thrives on the neat things you can do with technology. I’ve written books about smartphones and online social networks, and I’m reading things all day. But perhaps the most idea-generating part of my workweek is attending a knitting circle. I’m pretty sure at least a half-dozen other web professionals feel the same way, and you might as well.
Not a traditional knitting circle , mind you, but it’s the same kind of idea. Every week, I carve time out of a weekday morning to meet up with a semi-regular crew of guys about my age. Three are programmers, two (including me) are writers, two are entrepreneurs with hard-to-explain revenue streams, and one is a designer. We show up with links and articles we’ve found interesting, projects and ideas we’re turning over and trying out, and stories our wives are sick of hearing about. We have a Google Group, a Skype chat room, and we all use Twitter, but those morning sessions are what we’re really about. 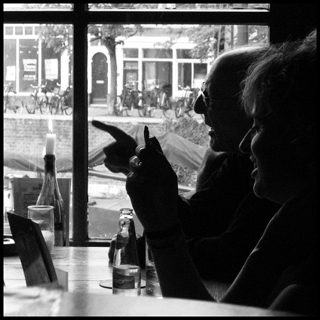 Left to our base instincts, we'd all probably spend that scheduled time, like most of our time, in front of a screen. But by forcing ourselves to meet up and talk, even if there’s no particular label or mission statement to it, we get vital exposure to the kinds of benefits that salespeople, network-savvy executives, and other people we usually try to avoid are seeking out. I’ve picked up paying work, traded contacts, sparked story ideas, and solved tech problems at those get-togethers. And I get much-needed practice at hearing others out, arguing my beliefs, and plain old face-to-face socializing.
That’s just dandy for me. But why should you start making regular, dedicated socializing a part of your schedule, and even tell the boss (possibly yourself) that it’s worth it? Here’s why you should get a group together, or just make it a point to walk around the office.

You need a real Third Place

The Third Place  is a concept of Ray Oldenburg, urban sociologist and author of The Great Good Place: Cafes, Coffee Shops, Bookstores, Bars, Hair Salons, and Other Hangouts at the Heart of a Community . The First Place is your home, and the Second Place is your office. You have assigned roles and tasks at each place, and you know nearly all the people in each. The Third Place is where you meet with people you don’t know that well, or maybe at all, and you exchange ideas, learn about other people, and, as Oldenburg sees it, enrich society and yourself.
Oldenburg published his major books on the Third Place in 1999 and 2002. Since then, the Second Place has changed quite a bit for some workers, so that it blends over into their home space, and even follows them through their phones into the traditional public interaction spaces. Your challenge, then, is to find a way to block out time where you’re not at home, you’re not at a screen, and you’re not seeing your family or best friends. You’re very consciously being social just to be social, and probably arriving back at your First or Second places a good bit happier.

You need to argue your ideas more

As much fun as 10-person, 20-message email roundtables about the proper name for the new project can be, there’s a lot of context, personality, and creativity lost when you don’t argue things out in person--respectfully, but with an audience, however small, to persuade. Just ask the guy who helps design software hosting giant GitHub. In a post on product design, Kyle Neath makes the case for arguing (and designing) in person .

… It’s not personal--it’s about making our product better. If you’re not forced to rationalize your product choices, who’s to say you’re making good decisions? Arguing with your co-workers isn’t a bad thing. It’s not creating a negative work environment--it’s a tool to help you make good decisions. Being an empty cheerleader and telling everyone that their idea is great is harmful and short-sighted. Argue and make good decisions.

Neath is talking about coworkers, but he’s also an advocate for hosting as many in-person meetups for GitHub customers as possible. And arguing out your case for a good idea (or shooting down a bad one) with your social group can be a great proving ground for doing it at the office.

Isaac Kohane, a Harvard Medical School researcher, studied over 35,000 peer-reviewed papers and mapped the locations of all their authors. The best studies, those that attracted the most citations from other published papers, were done by those who worked within 30 feet of one another. Jonah Lehrer wrote in the Wall Street Journal (and at Wired ) about the Kohane study, and other research showing that, despite the regular assumption that online social networks would replace in-person experiences, business travel, conference attendance, and downtown city office space rentals have gone nowhere--in fact, they’ve mostly increased.

For years now, we’ve been searching for a technological cure for the inefficiencies of offline interaction. It would be so convenient, after all, if we didn’t have to travel to conferences or commute to the office or meet up with friends. But those inefficiencies are necessary. We can’t fix them because they aren’t broken.

In other words, humans have evolved over many, many years to be very efficient at working with, arguing with, and talking over ideas and pursuits with people, face-to-face. Social networking tools and remote technology is nowhere near as efficient (yet). So grab your calendar and add "Talk to humans" to this week's task list.
[Image: Flickr user hellobo ]