Yesterday, we posted a chart that Josh Fischer at Snap Interactive (STVI: OTC BB) sent us based on analytics from their dating website Are You Interested.
It shows the likelihood that a someone on AYI.com responds to a message from a member of the opposite sex given their age difference. To the left, -10 means the sender was 10 years younger, on the right, the sender was 10 years older, with zero indicating that the sender and the recipient are the same age.
Here are the two plots for men responding to messages from women (blue) and women responding to messages from men (red). 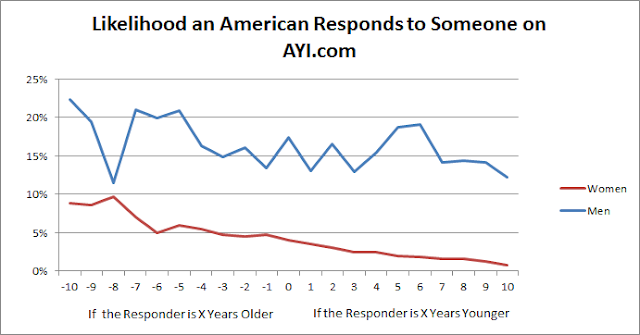 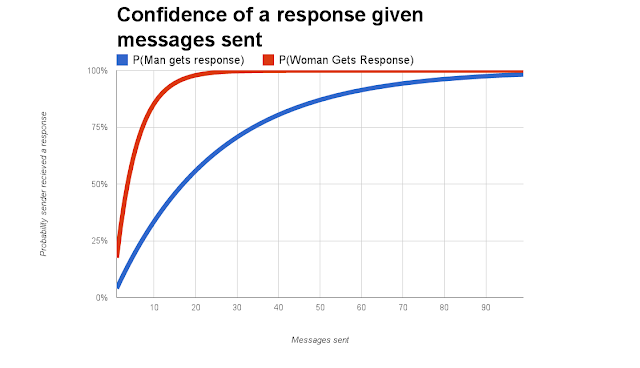 Walter Hickey / BI
Fascinating.
An average man who sends 18 messages to women his own age can be 50% certain he'll receive at least one response. For women, they need to send only 5 messages to be 50% certain they'll get a response.
Looking at higher confidence levels, if a woman wants to be 90% certain she'll receive a response from a man her own age, she'll have to send 13 messages. A man will have to send 58 messages.
Finally, to be 99% certain she'll receive a response, a woman must send 25 messages to men her own age.
A man will have to send 114 .
This leads us to believe that one potential cause of the disparity between the male response rate and female response rate is the system itself.
If men must spam women with messages in order to elicit a response, then women will be more selective when responding to the surplus in general. Since women are understandably disinclined to respond to all the messages, men must send out more in order to guarantee any response. It's cyclic.
Everyone is acting in their own self interest, inadvertently leading to further imbalances in the system.
It's one of the fundamental issues with online dating in general.
Anyway, best of luck out there folks.