De Lars Backstrom
Think back to the last time you were in a crowded airport or bus terminal far from home. Did you consider that the person sitting next to you probably knew a friend of a friend of a friend of yours? In the 1960s, social psychologist Stanley Milgram’s “small world experiment” famously tested the idea that any two people in the world are separated by only a small number of intermediate connections, arguably the first experimental study to reveal the surprising structure of social networks.

With the rise of modern computing, social networks are now being mapped in digital form, giving researchers the ability to study them on a much grander, even global, scale. Continuing this tradition of social network research, Facebook, in collaboration with researchers at the Università degli Studi di Milano, is today releasing two studies of the Facebook social graph.

First, we measured how many friends people have, and found that this distribution differs significantly from previous studies of large-scale social networks. Second, we found that the degrees of separation between any two Facebook users is smaller than the commonly cited six degrees, and has been shrinking over the past three years as Facebook has grown. Finally, we observed that while the entire world is only a few degrees away, a user’s friends are most likely to be of a similar age and come from the same country.

In our studies, performed earlier this year, we examined all 721 million active Facebook users (more than 10% of the global population), with 69 billion friendships among them. To date, these are the largest social network studies ever released. 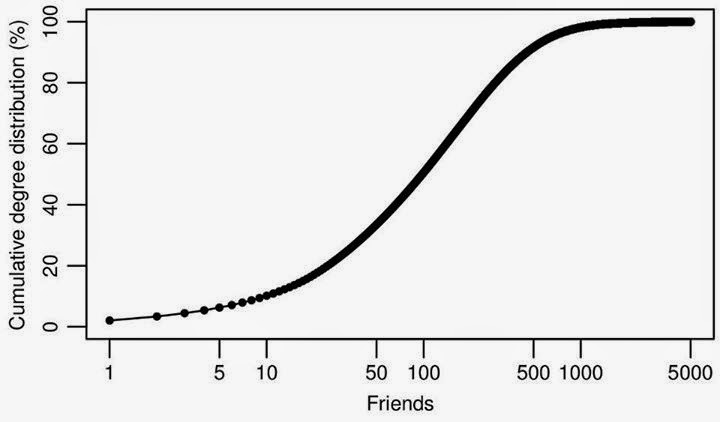 
At first glance, the median friend count on Facebook — 100 — may seem surprisingly low; a quick survey of my own friends reveals that they almost all have more than 100 friends. But no, your friends are not atypically social – a classic paradox regarding social networks dictates that, for most people, the median friend count of their friends is higher than their own friend count. On Facebook, that’s the case for 84% of our users. Why? Scott Feld wrote about this phenomenon in his 1991 paper Why Your Friends Have More Friends than You Do, showing that the same phenomenon dictates that college students typically find that their classes to be larger than the average class size, and that when sitting on an airplane, it will typically be more crowded than the average occupancy. These effects all arise because for people, classes, and flights to be popular, you must be much more likely to choose them. So you shouldn’t feel bad if it seems like all your friends are more popular than you: it appears this way to most of us.

The idea of ‘six degrees of separation’ -- that any two people are on average separated by no more than six intermediate connections -- was first proposed in 1929 in a short story by Hungarian author Frigyes Karinthy, and made popular by the John Guare play and movie,Six Degrees of Separation. The idea was first put to the test by Stanley Milgram in the 1960’s. Milgram selected 296 volunteers and asked them to dispatch a message to a specific individual, a stockholder living in the Boston suburb of Sharon, Massachusetts. The volunteers were told that they couldn’t send the message directly to the target person (unless the sender knew them personally), but that they should route the message to a personal acquaintance that was more likely than the sender to know the target person. Milgram found that the average number of intermediate persons in these chains was 5.2 (representing about 6 hops). The experiment showed that not only are there few degrees of separation between any two people, but that individuals can successfully navigate these short paths, even though they have no way of seeing the entire network.

While we will never know if it was true in 1929, the scale and international reach of Facebook allows us to finally perform this study on a global scale. Using state-of-the-art algorithms developed at the Laboratory for Web Algorithmics of the Università degli Studi di Milano, we were able to approximate the number of hops between all pairs of individuals on Facebook. We found that six degrees actually overstates the number of links between typical pairs of users: While 99.6% of all pairs of users are connected by paths with 5 degrees (6 hops), 92% are connected by only four degrees (5 hops). And as Facebook has grown over the years, representing an ever larger fraction of the global population, it has become steadily more connected. The average distance in 2008 was 5.28 hops, while now it is 4.74.

Thus, when considering even the most distant Facebook user in the Siberian tundra or the Peruvian rainforest, a friend of your friend probably knows a friend of their friend. When we limit our analysis to a single country, be it the US, Sweden, Italy, or any other, we find that the world gets even smaller, and most pairs of people are only separated by 3 degrees (4 hops). It is important to note that while Milgram was motivated by the same question (how many individuals separate any two people), these numbers are not directly comparable; his subjects only had limited knowledge of the social network, while we have a nearly complete representation of the entire thing. Our measurements essentially describe the shortest possible routes that his subjects could have found.

Your friends and you.
It’s easy for me to imagine that a path from me to a random person in Siberia goes first to one of my few Russian friends in California, and then hops around the globe to a friend of theirs living in Russia. But, while I can imagine these short paths connecting all pairs of people in the world, this notion stands in sharp contrast to my day-to-day experience. Most of my friends live in the US, and the ones I am closest to live within just a few miles of me.

This is what makes social networks somewhat unique: they are both well-connected in the sense that you can reach anyone from anyone else in a relatively short number of hops, but at the same time, they are very locally clustered, with the vast majority of connections spanning a short distance. In our study, we found that 84% of all connections are between users in the same country. But this isn’t the only dimension along which people tend to cluster. We also find that people tend to have a similar, albeit typically smaller, number of friends as their neighbors, and tend to be about the same age. Somewhat surprisingly, even for individuals aged 60, the distribution of their friends’ ages is sharply peaked at exactly 60.

In these two works, we show how the Facebook social network is at once both global and local. It connects people who are far apart, but also has the dense local structure we see in small communities. We show that, as Facebook has grown over the years, representing an ever larger fraction of the global population, it has become even more connected. In the years to come, we look forward to continuing to illuminate social trends and helping people understand how the world is becoming more connected.