Gender, Extraversion, and Team Cohesion
De’Mico Davis, Christina Espey-Sundt, Tenzin Kunsal, Joe Pickering, Kristen Svoboda
St. Olaf College
Sociology/Anthropology 371
Professor Sheppard
Fall Semester 2012
Acknowledgements: Thanks to Ryan Sheppard for advice and guidance, Charlotte Bolch for support, and Susan Cannon for sampling help
ABSTRACT
The existing research on the effects of gender and extraversion on team cohesion have produced mixed findings. Our research addresses the effects of extraversion on team cohesion and the effects of team gender composition on team cohesion. By surveying a simple random sample from a small, private liberal arts college in the Midwest, we collected data on respondent’s extraversion rating, gender composition, and the level of cohesion on their most recent academic team. We hypothesized that extraverted students are more likely to be on cohesive teams and that mixed-gender teams are less cohesive than single-gender teams.  Our results show that there is a relationship between extraversion and team cohesion, and that the gender composition of teams does not affect team cohesion. Gender composition of most recent teams was also included in our univariate analysis as an independent variable. Our survey asked participants to choose one out of the five options that characterized the gender composition of their most recent teams: “All Men,” “Mostly Men, at least one Woman,” “Half Men, Half Women,” “Mostly Women, at least One Man,” “All Women.” The mode for gender composition is “Half Men, Half Women.” The majority of participants responded to our survey using experience from a mixed-gender team (Figure 3).
Distribution of Mixed- and Single- Gender Teams 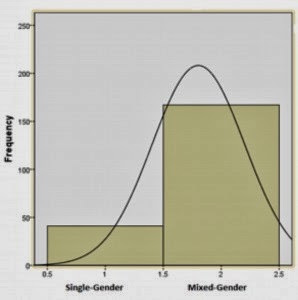